Millie and I get caught up in migration... 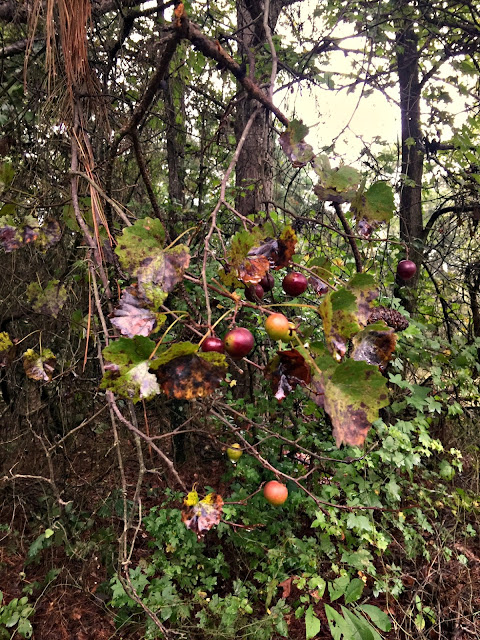 A couple of cool mornings was cause enough to bring out an old jacket to slip on before heading out for our morning jaunt over the hill.  I have noticed that Millie's coat is already getting a bit thicker, so she was happy for the briskness of the days.  I often tell her how much I adore that beautiful coat she's always wearing, and how much I would like to have one to match. I think I should wear it every day too. 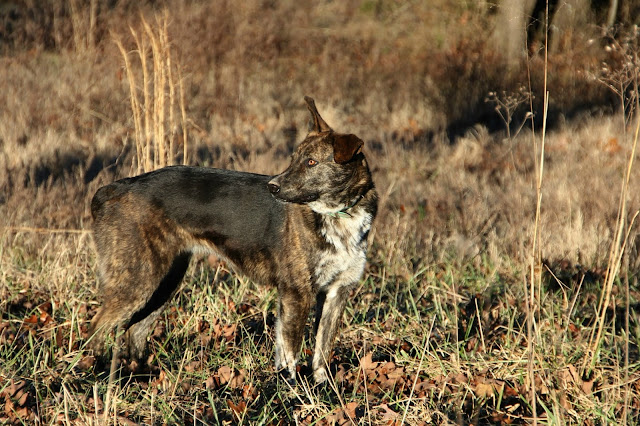 There are muscadines aplenty along the trails we walk, on which I, along with a lot of other forest critters, always stop to browse.  I will soon be missing this morning treat for there are scanty few remaining.  It was, in fact, a poor crop this year - so poor that there will be no oh-so-delicious muscadine jelly this winter. 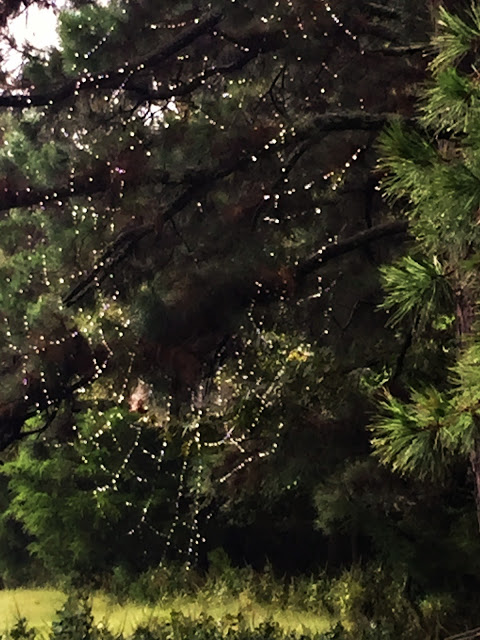 The woods is filled these mornings with what remains of yesterday's webs.  I wonder where the spiders have gone...

For a few weeks, we have had somewhat of a living science expo going on just outside our bathroom window.  Dan thinks spiders are creepy, and that I should have swept this one, web and all, away.  She was rather a disappointment compared to last years Golden Orb Weaver that took up residence at the hummingbird shed, but none the less, this year's weaver did put on some spectacular shows.  She is gone now, of her own free will, but left behind under the eave of the house four large egg sacks, which I have carefully removed and carried away to the woods.  She did her job, and did it well. Maybe, you remember last year's Golden Orb Weaver that I photographed and wrote about at that time.  I still think she was, in the ways of spiders, beautiful. 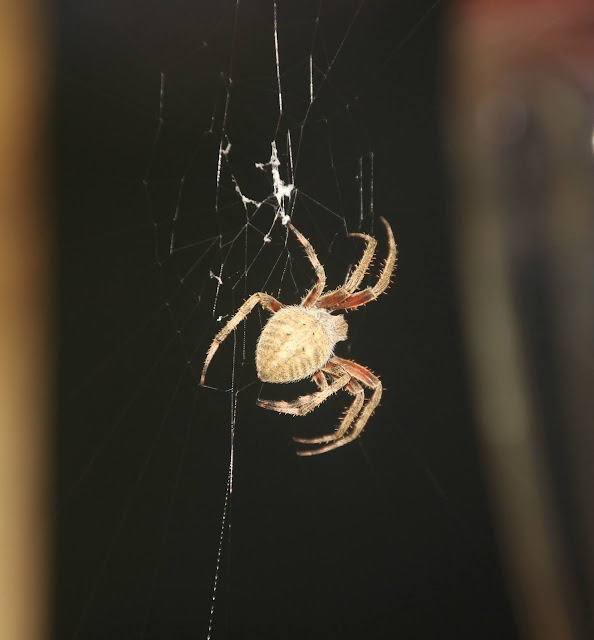 This morning was one of those mornings in which one just can't seem to get enough of.  I wanted to keep right on walking and taking in the loveliness of the day.  The thing of it was, Millie and I had gotten caught up in migration...Monarch Butterfly Migration.  Those loveliest of lovely creatures were flitting by right and left, intent on flying south, and, only occasionally, stopping at some inviting flower to refresh themselves.  I was able to capture a couple of these magnificent creatures at work in my old zinnia garden.  Oh, what beauties!  How I remember the Monarch paintings the kids at school used to do.  Some of them really got carried away with all those dots! 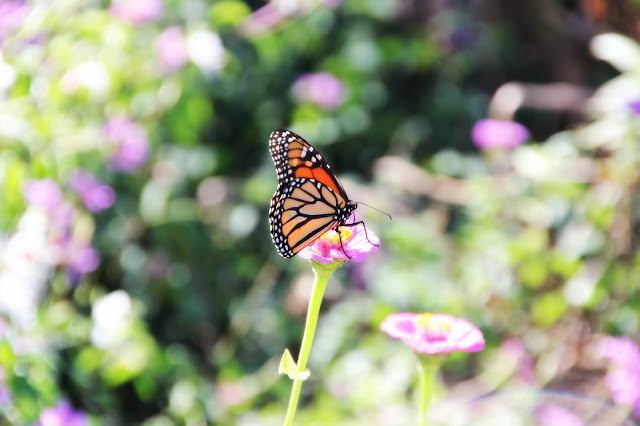 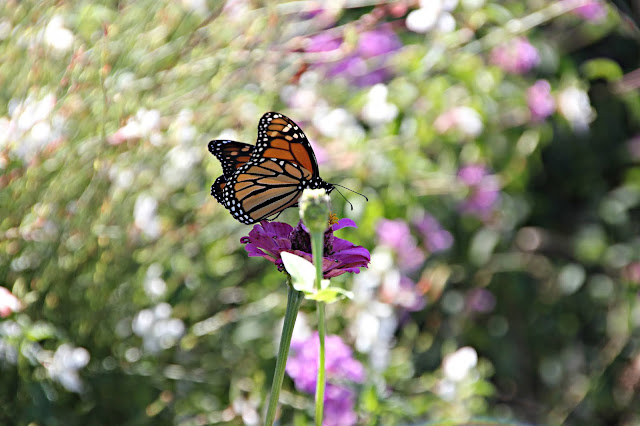 With all probability, we have rolled our last bale of hay for this year.  I didn't get a picture of it, but it certainly looked a lot like last year's final bale, minus the coyote. ( Millie and I have seen a couple of young black coyotes that look a lot like the one in the picture, undoubtedly some kin since black ones are somewhat rare.  Millie chases them. I tell her that she shouldn't do that since they are her distant relatives.) 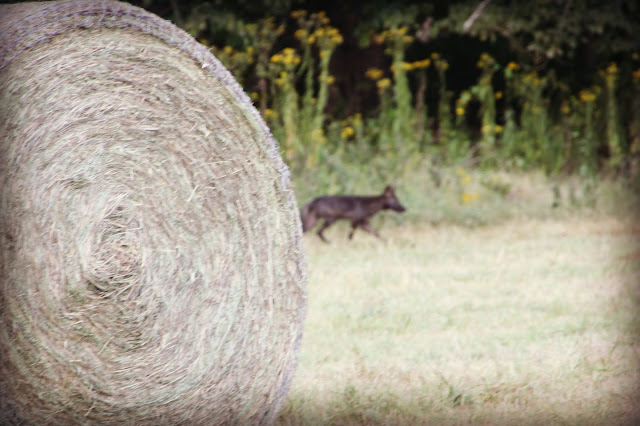 As of this morning, there were still around a half-dozen little hummingbirds here, lapping sweet sauce at the feeders as though their life depended on it.  And, well it may!  These remaining little jewels are just that...little...and do, in fact, look like jewels... bright shining green emeralds.  I looked at them long and hard this morning and have made myself believe that they were born in the northern plains of North Dakota, and that they have traveled long and hard to get here.  (Right, Sandra!) 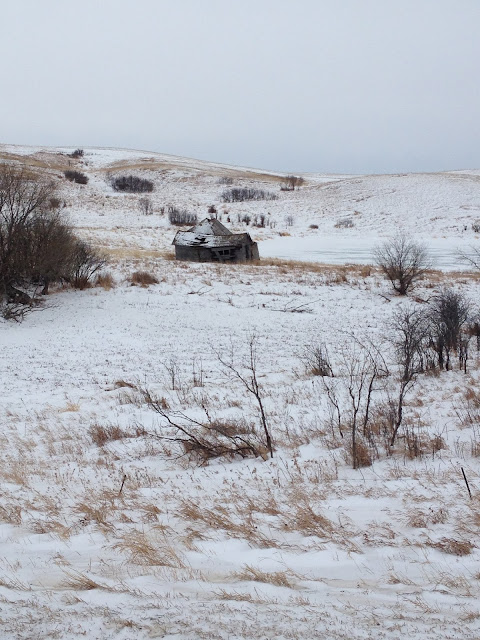 Photo was taken by my son when he was working in the oil fields of North Dakota.

Take care and happy trails to you all.  Next up is October!  Wow!  I surely am looking forward to that, and I am sure you are too! 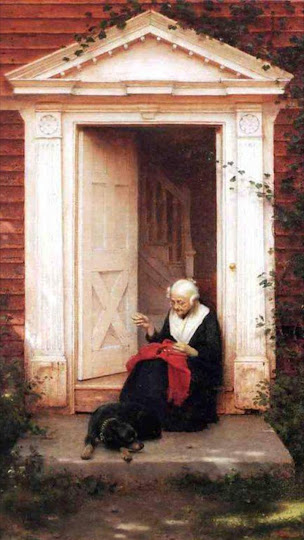 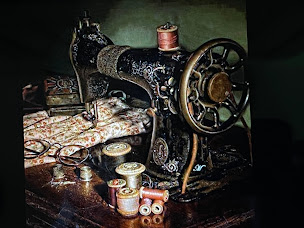